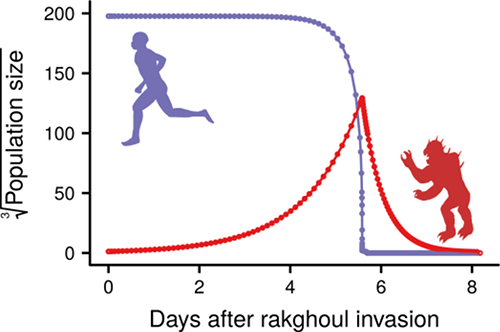 A long time ago in a galaxy far, far away, the Sith Lord Karness Muur engineered the rakghoul plague, a disease that transformed infected humans into near-mindless predatory rakghouls. At its peak, the disease infected millions of individuals, giving rise to armies of rakghouls on a number of planets. Whether rakghoul populations have persisted until this day is not known, making a rakghoul invasion on Earth not completely improbable. Further, a strategy for defence against an outbreak of the disease on Earth has not yet been proposed. To fill this glaring gap, we developed the first mathematical model of the population dynamics of humans and rakghouls during a rakghoul plague outbreak. Using New South Wales as a model site, we then obtained ensembles of model predictions for the outcome of the rakghoul plague in two different disease control strategy scenarios (population evacuation and military intervention), and in the absence thereof. Finally, based on these predictions, we propose a set of policy guidelines for successfully controlling and eliminating outbreaks of the rakghoul plague in Australian states.