Interested in the responses of diverse biological systems to environmental changes over short or long timescales. 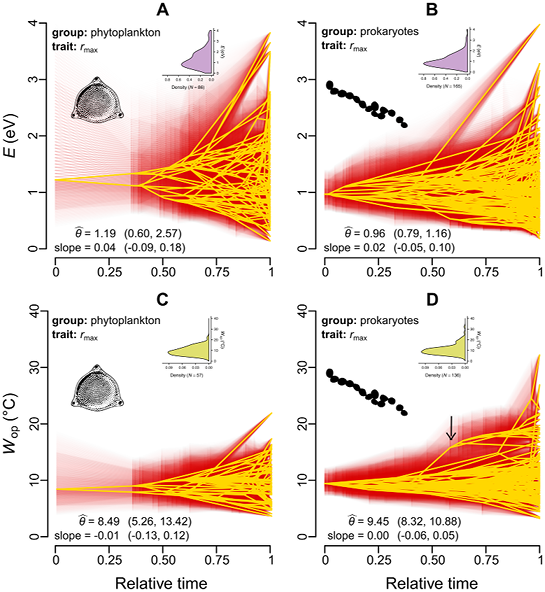 Developing a thorough understanding of how ectotherm physiology adapts to different thermal environments is of crucial importance, especially in the face of global climate change. A key aspect of an organism's thermal performance curve - the relationship between fitness-related trait performance and temperature - is its thermal sensitivity, i.e., the rate at which trait values increase with temperature within its typically-experienced thermal range. For a given trait, the distribution of thermal sensitivities across species, often quantified as "activation energy" values, is typically right-skewed. Currently, the mechanisms that generate this distribution are unclear, with considerable debate about the role of thermodynamic constraints vs adaptive evolution. Here, using a phylogenetic comparative approach, we study the evolution of the thermal sensitivity of population growth rate across phytoplankton (Cyanobacteria and eukaryotic microalgae) and prokaryotes (bacteria and archaea), two microbial groups that play a major role in the global carbon cycle. We find that thermal sensitivity across these groups is moderately phylogenetically heritable, and that its distribution is shaped by repeated evolutionary convergence throughout its parameter space. More precisely, we detect bursts of adaptive evolution in thermal sensitivity, increasing the amount of overlap among its distributions in different clades. We obtain qualitatively similar results from evolutionary analyses of the thermal sensitivities of two physiological rates underlying growth rate: net photosynthesis and respiration of plants. Furthermore, we find that these episodes of evolutionary convergence are consistent with two opposing forces: decrease in thermal sensitivity due to environmental fluctuations and increase due to adaptation to stable environments. Overall, our results indicate that adaptation can lead to large and relatively rapid shifts in thermal sensitivity, especially in microbes where rapid evolution can occur at short time scales. Thus, more attention needs to be paid to elucidating the implications of rapid evolution in organismal thermal sensitivity for ecosystem functioning.